Please accept my apologies, I started this post over a month ago. A lot has happened since then. Mostly, I started a new job and have been adjusting to a new work schedule. I do however digress to a discussion of my travel which ended almost two months ago. I also commit to regular posting (once or twice a week going forward). When we left off, I was leaving rural England for a new adventure – Scotland.

While we did some research prior to going, this portion of the trip lacked our usual planning. We have admired Scotland from afar. We were attracted by Scotland’s history, culture, topography, and climate. Only during our trip did we learn of Outlander – which apparently is a big deal. Long story short, Scotland did not disappoint.

Prior to arriving, we asked several friends about Edinburgh. “Are you staying in Old Town or New Town?” I looked at a map and couldn’t really tell. Old Town dates back to medieval times and includes Edinburgh Castle and the Royal Mile and basically everything “up the hill.” New Town dates back to Georgian times (1714-1830s). To an American, both are old. Each parts are charming. Upon arrival, I learned we were based out of New Town at the Caledonian Hotel. The hotel is located at the base of Edinburgh Castle.

For a number of reasons, we decided to fly to Edinburgh rather than drive or take a train. Upon arrival, the airport was easy to navigate. While we planned to take a taxi to the hotel, we took the tram. For our next visit, we will most likely take a train from London or fly directly to Edinburgh.

We spent most of the first day acclimating to the city. We walked around New Town and eventually found our way to Old Town. Once in Old Town, we walked the Royal Mile to the Palace of Holyroodhouse.

This is the official residence of the Queen in Edinburgh. The palace dates back to 1128. It was a wonderful palace to introduce us to Edinburgh. If you go, I highly recommend visiting.

Our second day in Scotland was the one I anticipated the most. It involved a bus tour from Edinburgh to St. Andrews and the opportunity to walk on the famous Old Course. We booked a tour with Rabbies Tours. It was a nicely done tour with stops in Anstruther, St. Andrews, and Faulkland. Each stop was unique.

Anstruther was a quaint coastal village with a small market along the street. 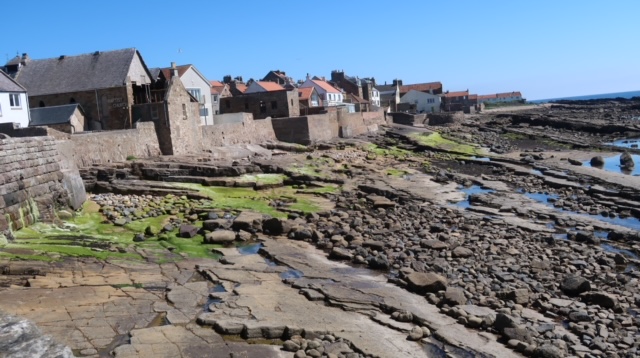 The views of the Firth of Fourth were stunning.

St. Andrews was everything I thought it would be. I loved walking around the Old Course and crossing the Swilcon Bridge. We also walked around the main streets and the University of St. Andrews.

Faulkland has a lot of history and a very nice palace but we didn’t have enough time to enjoy the palace. Overall, a very good tour which was reasonably priced. The guide was friendly, funny, and knowledgeable. I thought this was going to be the highlight of our time in Scotland. It was an amazing day but it finished second.

Day 3 saw us taking a 20-minute taxi ride to the west side of the Pentland Hills Regional Park at the car park near the Threipmuir Reservoir. We had no idea what we were doing, where were going, or how we would get back to Edinburgh. It was the best day of our travels. Arguably, this was the best day of the trip. We walked around the Threipmuir Reservoir, up and around Black Hill, and through the Green Cleugh (missing Bavlev Castle).

This took us to the Howe, by Howlett’s house, and along Loganeia Reservoir while looking at the east side of Black Hill and the west side of Carnethy Hill. We continued along the Logan Burn by the Glencorse Reservoir eventually making our way to the Floterstone Inn where I had a couple of pints. 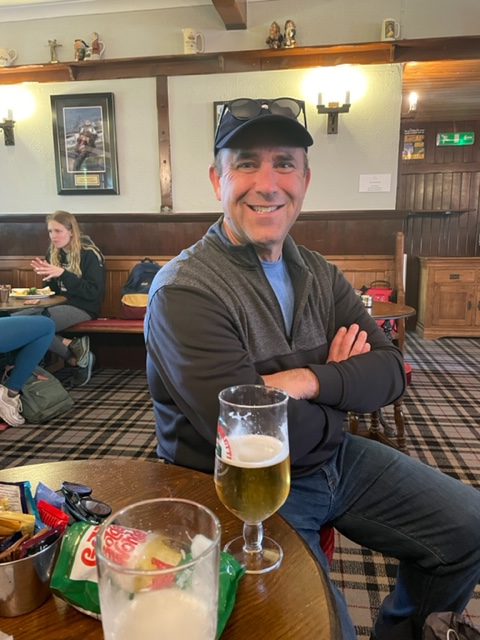 Conveniently there was a bus stop at the Floterstone Inn and we took the bus back to Edinburgh. There are few words to use to describe this 3 – 4 hour hike. It was amazing. If you get to Edinburgh and you like to walk in nature, go to Pentland Hills Regional Park.

On the fourth day, we spent some time shopping in the morning. We walked from our hotel along Princes Street towards the Waverley Train station. We stopped in several stores before arriving at St. James Quarter. If you get to Edinburgh, I recommend you check this place out. If you can’t find what you want here, it probably isn’t available in Scotland. Unfortunately (or fortunately), we didn’t have much time to shop as we had an afternoon admission time at Edinburgh Castle.

As we approached the castle, you feel the energy. There were many people on the Royal Mile and even more as we approached the castle entrance. If you come to Edinburgh, you must visit the castle. It is the heart of the city. It sits atop a hill overlooking the town. Parts of the castle are nearly 1000 years old. I would advise booking the first time available for entrance to minimize the impact of the crowds. I loved the history and the views on our tour. St. Margret’s Chapel is small but amazing.

The Scottish Crown Jewels and the Stone of Destiny a must-see for history buffs. Yet, there were parts I did not like. I did not like the crowds. There were too many people. Further, the castle, like many of the historical sites in the United Kingdom (and elsewhere), has been Disnified. Further, they are not allowing guided tours so you are left to your map or your audio guides (perhaps someday I will write how audio guides are destroying historical places and ruining the experience). Yet, overall, this is a must-see. Read about it before you go and go early.

Our final full day in Edinburgh was a long wandering day, we left our hotel, walked down up to the Royal Mile, and eventually to the trailhead of Arthur’s Seat. The climb up Arthur’s Seat was challenging but doable (be sure to bring good footwear, water, and a walking stick). It takes 45-60 minutes to get to the top. Be sure to stop by the St. Anthony’s Chapel Ruins on the way up (or down). If you go early, there are fewer people. We saw more people going down than on the way up.

On the way down, we diverted away from people towards the Dunsapie Loch and along Queen’s Drive. Upon arriving at St. Margaret’s Loch, we diverted heading towards the Firth of Fourth and stopped at BabaRista for some refreshments and rest. We continued towards the water and walked around Portobello Beach. At this point, we decided we were tired. Against our better judgment, we decided to walk the 4+ miles back to our hotel.

On the way back, we needed rest again and stumbled upon the Scottish Parliament. An eclectically modern building, it had the cleanest bathrooms of the trip.

It was fun to learn about the government and walk through the building. While they were debating the issues of the day, we elected for a quick bite to eat and walked back to the hotel. My app tells me we walked 18.4 miles that day.

For most of our stay in Scotland, the weather was amazing. Clear to partly cloudy with temperatures in the upper fifties to mid-sixties. This all ended on the day we left. While the temperature remained about the same, the skies opened up and it rained. Perhaps Scotland was crying because we were leaving. We traveled from the hotel to the airport and flew to London Heathrow where our next adventure would begin.

To wrap up our trip, we took covid tests at Heathrow and ventured to our hotel which was located at the airport. We had a nice meal in the restaurant, watch the sunset from the rooftop bar, and went to bed.

One thought on “Scotland”